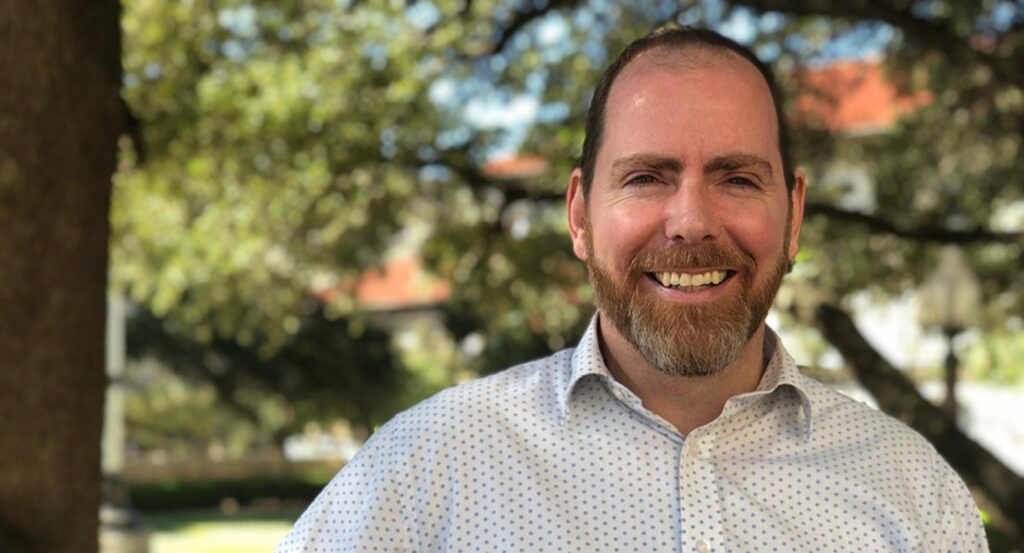 Brad Love is a university distinguished teaching professor and the associate director of the Center for Health Communication in the Moody College of Communication and Dell Medical School. His profile is part of a series highlighting UT Austin’s faculty members who were first-generation college students in celebration of national First-Generation College Celebration Day.
Who or what inspired you to go to college?
My going to college was entirely about teachers and friends from school. I was incredibly fortunate to be in supportive school environments where the idea of college frequently came up, and my friends in high school regularly discussed going to college.

Until I arrived on campus, I had never met anyone who had been to college. In fact, one of the large reasons I even went to college was because a friend just suggested applying. We were walking down the main corridor at our high school, and he said we should stop by the guidance office to do the state application. It was the only application I filled out, but it got me a scholarship so I figured, ‘Why not? College here I come.’

What was it like for you in college as a first-generation student?
College was so strange to me. The norms and life experiences were so different! I had never seen a blazer in person — never mind worn one (I didn’t know what it was, actually) — and yet just a few weeks in for student group meetings and professionally oriented events we had to dress up a bit. I had to borrow so much and make so many mistakes to learn how to operate in that new space — still do.

That being said, it was also so thrilling to be in a place surrounded by dynamic young people and be introduced to peers with all kinds of inspiring aspirations. Once again, I was hugely fortunate to find some more senior students who coached me on how to function in that new world.

Did you have a mentor while you were in college? If so, how did he or she help guide and inspire you.
I wouldn’t say a mentor, no, because I wasn’t savvy enough to pursue one. I didn’t understand that engaging with people on that level was something a person could do. I did, however, have amazing peers who filled in so many of the missing details for me.

What advice do you have for current first-generation students at UT Austin?
Build a personal ‘board of directors.’ Reach out to four to five people whose work you admire in the world, or peers a couple years ahead of you doing interesting things and establish relationships. Just like an organization would do with its board, be in regular touch with your group to discuss your aspirations and plans. There’s a human challenge for everyone that we don’t know what we don’t know, so it’s important to learn from the experiences of others and avoid repeating the same mistakes.

Also, other people will see the incredible heights of your potential and point out the amazing things you could do in the world, encouraging you to be ambitious and impactful. Have conversations and ask for support.

Additional thoughts.
My experience with our students is that they’re so thoughtful, talented, and driven that it’s obvious they’re going to build impressive things in the world.